The former Walter Reed Army Medical Center (WRAMC) is located on a 110.1-acre campus in upper Ward 4 of Northwest Washington, DC between Fern Street and Alaska Avenue to the north, 16th Street to the west, Aspen Street to the south, and Georgia Avenue to the east. In May 2005, the Secretary of Defense recommended to the BRAC Commission the establishment of a new Walter Reed National Military Medical Center (WRNMMC) in Bethesda, Maryland. By mid-September 2011, the WRNMMC was co-located on the current campus of the National Naval Medical Center. The relocation of existing functions from the WRAMC allows the old Walter Reed site to be adaptively reused and redeveloped for new purposes.

After the 2005 decision to relocate WRAMC, the General Services Administration (GSA) and the Department of State (DoS) requested the property through the Federal screening process (34 acres and 79 acres respectively). However, in March 2009, the DoS notified the Army of its intent to reduce the previously requested acreage to just 16 acres. As a result, on August 7, 2009, the Federal government declared a 62.5-acre surplus at the former Army hospital, thereby making portions of it available to a Local Redevelopment Authority (LRA) for redevelopment. For sources and more information regarding the Walter Reed LRA and plans for the site click here.

In April 2019, Johnson & Johnson Innovation, LLC, and Children's National announced a collaboration to launch JLABS @ Washington DC, a 32,000-square foot facility to be located at the new Children's National Research & Innovation Campus. View the photo gallery and video from this event. In the fall of 2019, Children’s National and Virginia Tech announced a formal partnership that will include the launch of a 12,000 square foot Virginia Tech biomedical research facility within the new Children’s National Research & Innovation Campus.  In 2020, Children's National will open a new outpatient care center that will include comprehensive pediatric primary care to conveniently serve our community.  For a virtual tour of the proposed campus, click here.

Additional presentations and documents regarding the Children's National Research and Innovation Campus can be found here. (Coming soon) 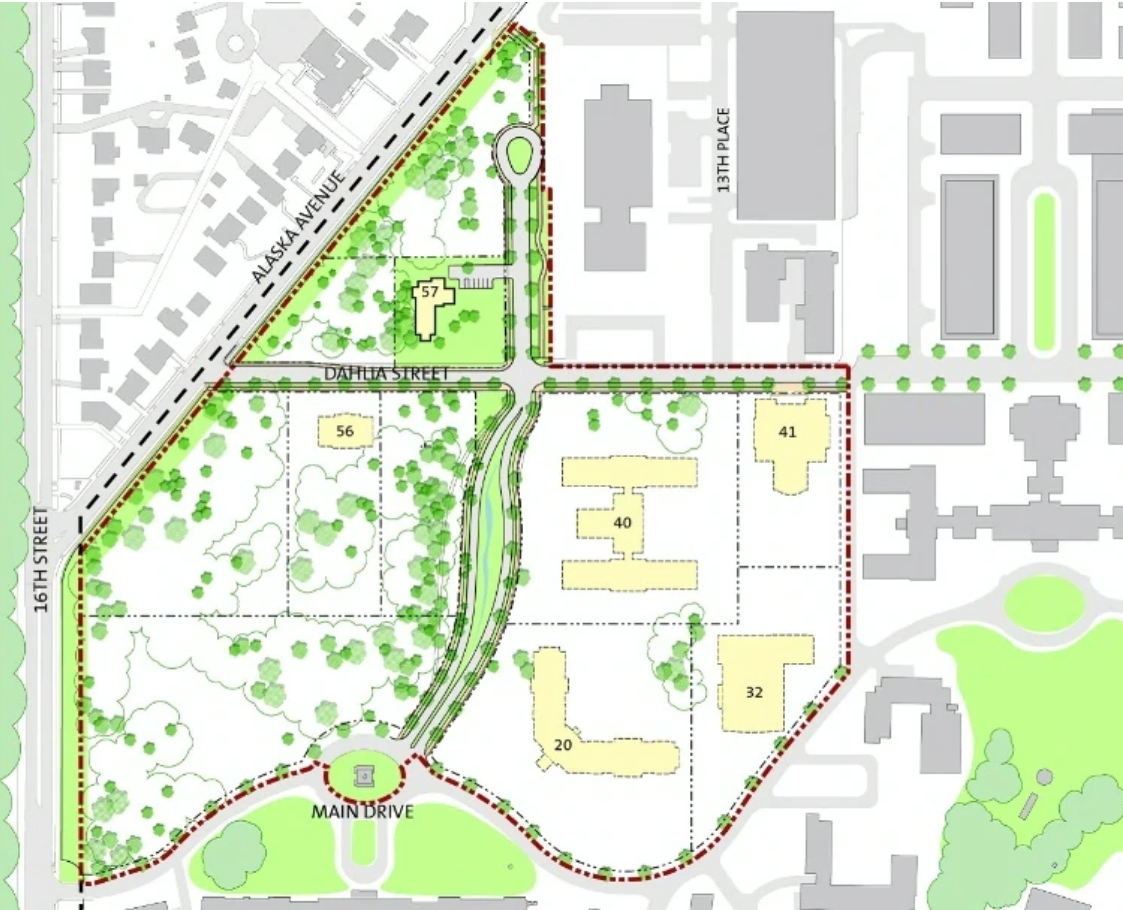 The U.S.  State Department now owns approximately 32 acres of the former Walter Reed Army Medical Center at the intersection of 16th Street, NW, and Alaska Avenue, facing Rock Creek Park. The State Department intends to redevelop this property into a chancery center called the Foreign Mission Center (FMC), which will be similar to the Department’s International Chancery Center, located in the District of Columbia near the intersection of Connecticut Avenue and Van Ness Street.

The State Department's vision for the FMC master plan is to reinforce existing cultural and natural landscapes, reuse key historic structures, and respect existing formal building arrangements.  The FMC has become a central meeting place for foreign missions with events such as the Foreign Missions Festival taking place in October 2016 and 2017. The Office of Foreign Missions has also hosted a number of foreign missions and delegations at the FMC’s chapel, a historic landmark that has provided the perfect venue and meeting space for bilateral meetings and events.  Currently, the FMC is home to the Embassy of Libya.

More information about the FMC can be found on the U.S. State Department's website here. Additional presentations and documents regarding the Foreign Missions Center can be found here. (Coming soon)

The Parks at Walter Reed

The Parks at Walter Reed is a 66-acre land development of the historic Walter Reed Army Medical Center site that when fully developed is planned to contain 3.1 million square feet of new construction and adaptive reuse of historic structures, including retail, for-rent and for-sale multifamily, townhomes, office, healthcare, a school, and a hotel.

The development will contain approximately 220,000 square feet of retail, more than 300,000 square feet of office and ambulatory care, a 200-key hotel and conference center, a top-performing language-immersion school, and 30,000 square feet of creative and arts uses. More than 2,099 units of high-quality housing will be developed to serve a diverse mix of incomes and households, providing both rental and homeownership options.  The Parks at Walter Reed will include new roads and infrastructure and nearly 20 acres of parks and plazas and will employ energy-saving and water-conserving tools. For more information, visit The Parks at Walter Reed website.

Additional presentations and documents regarding The Parks at Walter Reed can be found here. (Coming soon)